Excellence is not a static condition but an ongoing quest. Or in other words: If you want to continue to do really well in the long term, you have to keep making improvements in the short term. Entirely in line with this philosophy, we at Rotan, with over 200 employees, develop complete solutions - from pipe and plant construction and tank storage to EL&C and cleaning technology - for our customers from the most diverse industrial branches at home and abroad.

As an innovative company, we meet the individual needs of our customers and react with maximum flexibility to their wishes. The entire project is implemented from one single provider. Professional, highly qualified specialist staff assist our customers from the planning and construction stages to inspection and service performances. We work in accordance with state-of-the-art technology and the latest quality standards. The headquarters of our company, founded in 1987, can be found in Dannstadt, just a few kilometres away from the industrial metropolis Ludwigshafen am Rhein. And with our additional branches in Rostock, Leuna and Gelsenkirchen, we are always close to our customers.

WE’RE BIG ENOUGH TO KEEP PACE WITH ANYONE. WE’RE ALSO SMALL ENOUGH TO BE AGILE. 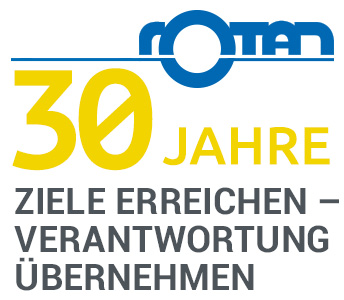 As former employees of MaroBau, a subsidiary of Halbergerhütte, the gentlemen Heil, Hammer, Seegmüller and Holzwarth establish the company Rotan in Dannstadt to specialise in pipe construction and tank storage.

An office and workshop building is constructed in Dannstadt.

A branch is established in Leuna with M. Wüsthof at its head.

The Cleaning Technology division is established with Wolfgang Haucke at its head. The workshop is expanded at Riedstraße 3 in Dannstadt.

An office and workshop building is constructed in Leuna.

The workshop building is expanded in Leuna and pre-existing social facilities are renovated.

An office and workshop building is constructed for the Cleaning Technology division.

The office and workshop building for the Cleaning Technology division is expanded.

A branch is established in Rostock with Volker Zimmer at its head.

Thomas Holzwarth, son of co-founder Bernd Holzwarth, is appointed as managing director of Rotan after completing his engineering studies and gaining several years of professional experience in major projects. From this point forward, Rotan is completely owner-run under the joint control of Bernd and Thomas Holzwarth.